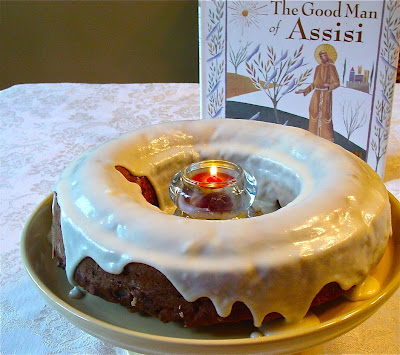 Just in case you are a reader here, but not a reader at Catholic Cuisine, I am posting the recipe for today's feast day dessert: St. Francis' Poor Man's Tonsure Cake. The tonsure is, of course, St. Francis' hairdo (for lack of a better word). St. Francis, in the practice which many monks, friars 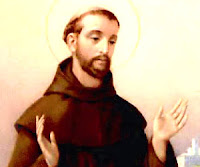 and other religious adopted, clipped his hair away from the top of his head, creating a ring of sorts, of hair around the sides of his head. A ring-shaped cake resembles the tonsure, and the cake recipe, a Poor Man's Cake, is a perfect cake for the saint who left the riches of his family to live among and serve the poor.

The cake recipe has been passed down from my 94-year-old grandma. It is called a Poor Man's Cake because when my grandma was young, butter and eggs -- traditional cake ingredients -- were dear (expensive), and raisins, nuts, and spices were plentiful.

This cake would also be wonderful for St. Anthony's Feast Day, on June 13, as he was also a Franciscan (and thus sported the tonsure) and is patron saint of the poor.

Spoon into prepared pan. Bake for 50 minutes to 1 hour, until toothpick comes out clean (my ring pan requires less baking time than my bundt).

Cool 15 minutes.
Turn out of pan and cool completely on a baking rack.

Frost with butter or cream cheese frosting of your choice, or top with the thick butter glaze below.

In a bowl, mix melted butter with powdered sugar, 2 T. milk, and vanilla until blended (no lumps) and a thick drizzling consistency, adding a little more milk if necessary.
Spoon over the crown of the cake, allowing it to drip down the sides.

It looks delicious! If I didn't have cookie dough already chilling in the fridge, I would be whipping this up! Can you send me a slice? :)

I LOVE this cake! I have an almost exact replica of this recipe from my own grandmother, except she calls it "war cake" because all the "good" ingredients were rationed! She has also been known to call it "poor man's fruitcake" when we make it at Christmas time, since she doesn't want to talk about war at Christmas. :) We make ours in loaves, and I've never thought of doing it in a ring. Maybe I'll have to see if I have time to fit this recipe in tonight.

Charlotte,
Saving you a piece!

Aimee,
I love a recipe passed down by grandma. Not only do I get to eat yummy cake, but I get to think about grandma while I'm baking! I hope you find some time. It's really very no-fuss.

It's so interesting how the price of the ingredients has flip-flopped! My grandmother's recipes are my favorites - for many reasons. What a nice cake!