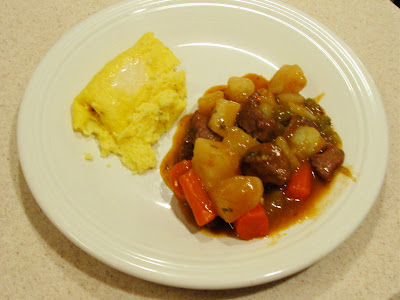 I've been trying quite a few new recipes lately to create a collection of lower fat recipes I can turn to more frequently, especially now that we're dealing with reflux in the family. I recently finished reading a book on reflux, which not only explained the disease, but also offered a lot of really good recipes.

Many of the recipes in the book (Eating for Acid Reflux) are not kid friendly, but one I tried on Sunday was very family friendly. And regardless of the fact that it's lower in fat, it is a keeper recipe -- it kicked the pants off my old recipe.

I used 2 lbs of stew meat, and trimmed the fat even more than the butcher. I probably ended up with a little more than a pound and a half. I cooked this recipe longer than the book recommended, because I like my stew meat to be very tender, and the vegetables soft (but not mushy). We omitted the turnips, but only because I'm the only one who eats them and I could only find a bag of them at the grocer. The only gripe I had about the recipe was that the liquid was too much (the recipe called for 8 cups). I thickened it with cornstarch and water and made boatloads of gravy, but it was just too much to begin with. I will reduce it to 6 cups in the future and probably still thicken it (I've written that in the recipe below).

I served it with Spoon Bread from "Cooking Light." The recipe is here -- it was wonderful. 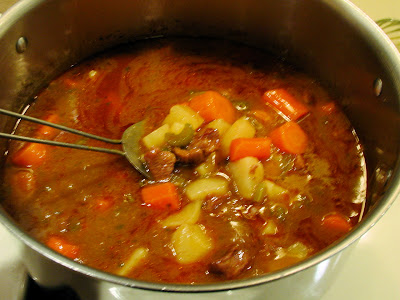 Dredge meat in flour and pat to remove extra flour.
Heat half the oil in large pot 0ver medium-high heat.
Add half the meat and cook to brown lightly.
Remove the meat, add the remaining oil,
and cook remaining meat until lightly browned.
Put all meat back in pot.

Add garlic, tomato paste, thyme, salt, Worcestershire,
parsley and broth to the pot; stir well.
Bring the liquid to a boil, then reduce heat to simmer.
Cook, covered, stirring occasionally,
for one hour.

After one hour, add vegetables and simmer until
vegetables are very tender, about an hour.

If stew is too juicy, stir 1 T. cornstarch into 3 T. cold water and stir.
Bring stew to a bubble and add half of cornstarch liquid to stew.
Stir until thickened and if stew is still too juicy,
add the remaining cornstarch mixture.

This looks delicious! Gonna make tonight :) Thanks for sharing!