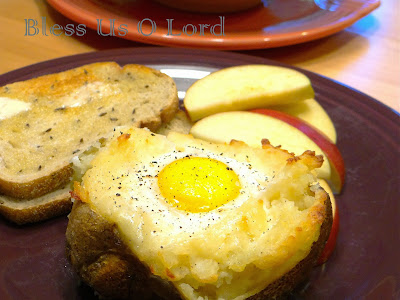 If you read my menus, you know we eat breakfast for dinner quite a bit. I don't cook a big breakfast, except on Sunday, and breakfast food is so good (and inexpensive), my husband and kids like eating it more often than once a week.

This recipe intrigued me, just by looks alone. Potatoes and eggs go great together, but an egg cooked in a potato? Really intriguing. Essentially it is similar to a twice-baked potato, but with a hole created in the filling where an egg is cracked and baked. The recipe called for sausage, but I omitted it to make a meatless meal. It would be delicious with sausage, but also with ham or bacon, for a Sunday brunch. I am listing the recipe as I made it below, but if you have ever made twice-baked potatoes, you know you really don't need a recipe. Bake the potatoes, cut off the top, scoop out much of the potato leaving a thin shell, mash potatoes with butter, parmesan cheese, sour cream or cream cheese, or a little milk and some shredded cheddar or swiss. The combinations are endless -- adding meat or not -- just keep the potato mixture rather firm so that it holds the well needed to crack the egg into.

I cooked for four of us, but essentially use one potato, one tablespoon butter, 2 tablespoons shredded cheese and even two tablespoons of chopped meat (diced ham, cooked sausage or bacon), plus one egg for each person.

Serve with toast or biscuits, and some fresh fruit.

Bake potatoes for 45 minutes to 1 hour, until done.

Remove from oven and cool for about 15 minutes.

Cut off the top of potato, creating a "boat." Scoop potato out of potato and place in a bowl. Repeat with each potato. Add butter and mash potato with a masher until no longer lumpy. Salt and pepper mixture and then add cheese (or other optional ingredients). Stir until well mixed. Spoon potato mixture back into potatoes, dividing among them. Place potatoes in a baking dish, lined with foil, or greased lightly. Make a well in each potato, and crack and egg into each well (depending on size of egg it may overflow slightly -- that's alright).

Place baking pan back in 400 degree oven and cook for 10-15 minutes, depending on desired doneness. Salt and pepper to taste.

That sounds so amazingly good, I think I might make one for lunch!

It sounds awesome. I'm craving potatoes, and we just got a supply of eggs from the farmer....

hey, love this! My husband is starting an evening shift next week. This means our family meal will be an early lunch time,and I decided I would make this a brunchy type of meal. This would be perfect, especially if I can manage to make potatoes for dinner the night before and make extra for brunch the next day.

Tried these!! Pretty yummy, although I had to make do without the cheese for Charles' sake - but still even though they do take awhile they are an easy yummy meal!

Thanks so much for posting this recipe! We will be enjoying this for supper often! :)

Fun! Last night we had a pizza with bacon and eggs on top. The eggs were baked on top of the pizza much like these are baked in the potato. It invites me to think about eggs in a new way. I don't think I'll order that pizza again but I think I might really
like your creation!